I Waited for Two Hours. What was the Point?

Here’s a conversation I had with myself while waiting in sub-freezing temperatures for two hours to spend about five minutes in an art exhibit. I had some real epiphanies about parenting and art…

9:40, not bad. Surely that chalked sign on the sidewalk can’t be accurate: ’90 minute wait from this point.’ Yeah, right. It can’t seriously take that long to see this Japanese artist. Wait, what is this exhibit, again?

I dunno. I just saw it on Instagram and read about it in the Times, a few months ago. So…I’m here because the Times and some people on IG told you to come?

So we are posers. Just wanting to see things cuz other people are doing it?

I guess. Isn’t everybody?

Seriously – except for the 1% of artistic elite (and who are those people, anyway?) aren’t we all just seeing stuff cuz other people tell us to?

Do you think we’ll get in and think it’s stupid?

I mean, duh. It’s some 90 year-old woman’s paintings of polkadots.

Seriously – like, our six year-old could almost do the exact same thing.

How much time has passed?

Three and a half minutes.

Jesus H. I’m freezing. Thank goodness for this coffee to warm my hands.

<20 seconds of silence passes in the freezing cold>

Two hours in the bitter cold just to say we did it? Is this worth it? This is when New York sucks. There’s just too much demand.

I know. The crowds screw it up for everyone.

But we still play the game. You just do these things to say “I was there”?

That play you had to see in three parts and some people saw it all in one day.

Right. I missed that. Coast of Utopia?

That photographic exhibition on the old White Star Lines pier ten years ago?

Right. With the over-sized sepia photography of elephants and kids underwater.

Oh, yeah. That was…random. But it felt cool to have seen it.

And brag that you were there.

But now? We’re standing in line for 2 hours…

Please don’t let it be that long…

And we will be in this room for a couple minutes, at the most.

Yeah, they don’t let you linger more than 30 seconds in the three rooms. There’s just too much demand.

Ohmigod, this is bullshit.

Seriously. And then in those 30 seconds, we’re just gonna have our phones out Insta-bragging about the experience. Shouldn’t we put phones away and just be in the moment?

Are you fucking kidding? Then there’s no proof we were there. If it doesn’t happen on Instagram….

I know. But this is art and it’s fleeting. Maybe we should go all 19th-century?

I kinda think you shouldn’t photograph churches or sunsets. Photos never do it justice.

Um, 1986 called. It wants its photographic pretension back. Are you kidding me? This is why we’re here! Pretension! Shouldn’t we be too good for instagram?

I suppose. This kinda thing drives me crazy, though. Reminds me of my mom. She drug me around to museums and always took 6 hours to read every panel about harbor seal genus or random Dutch painters who weren’t even in the same epoch as Von Gogh. It was awful. I hated museums.

But you remember going, right?

And were you the most worldly 4th grader having schlepped through the Air and Space Museum for six hours?

Um, maybe? Was it worth it? Wouldn’t I still have been smart’ish without suffering through four hours in an art museum that no 10-year-old could care about?

So what would be the point?

They’d remember it like you remember suffering through the Air and Space Museum.

Is that why we do this? We bring on the sadist and the masochistic cultural suffering to brag we were there and hope our kids will have a faint memory of having done it…just so we all get social ladder points for saying, “I was there.”

Couldn’t we just see it in a book? Instead of waiting for 2 hours in 27 degree weather? How long’s it been? An hour?

I can’t feel my feet and my coffee’s gone.

So then we will get inside and just video the entire thing and our pictures of ourselves will be in mirrors with our own reflections. How’s that an artistic experience?

Shouldn’t it be a pure experience? Something zen-like?

Will I ever watch the video again? Sure as shit no one else wants to watch it.

What’s a “pure” artistic experience, anyway? Who can quantify that?

I suppose just being silent with the art.

Sure. Silence is golden. But we’re limited to 30 seconds. It’s not like you can commune with any of this polkadot nonsense.

How do you ever achieve zen –like appreciation of anything? A sunset, a church, a piece of art?

I dunno. Just…try to enjoy it.

Has it been an hour, yet?

It’ll be great. Just…enjoy the moment.

I mean, shit. It’s just polkadots. Are you supposed to get greater meaning out of life from polkadots?

And tiny, repetitive eyeballs painted by an OCD 90 year-old woman.

Right, that. Is that really art?

See? Don’t we need more colorful eyeballs and polkadots to take us out of our every day?

I guess that could be enough.

Sometimes it just needs to be. Smile at the polkadots, even with your phone in your hand. Enjoy it.

Yeah, I suppose even Van Gogh would say that.

Eh, probably not. He’d have already become pretentious and over-analytical.

But for the rest of us…just…enjoy it.

Why am I sweating so badly in my pits? Always in the cold, if I just stand here, my pits are over-active. Are they confused?

I can’t answer that for you.

So this’ll be worth it?

And I guess that pulls us out of our everyday muddling through Trumpian times.

That should be enough.

And we can brag “we were there.”

And that’s the point of art?

Sometimes. Why not? A memorable blip on our generally boring existence?

How much time, now? 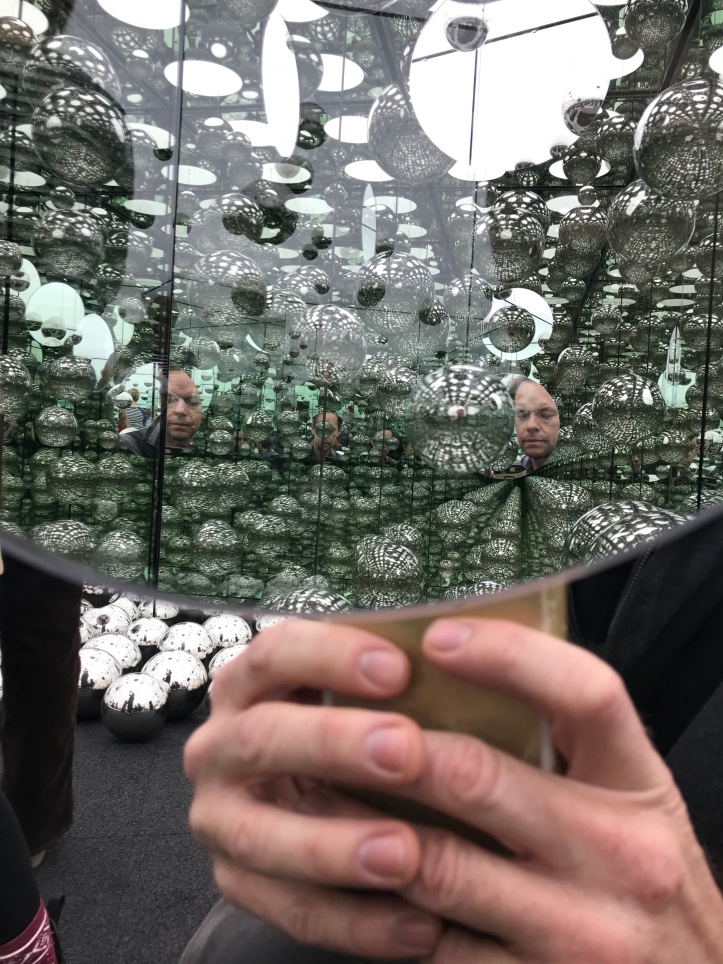 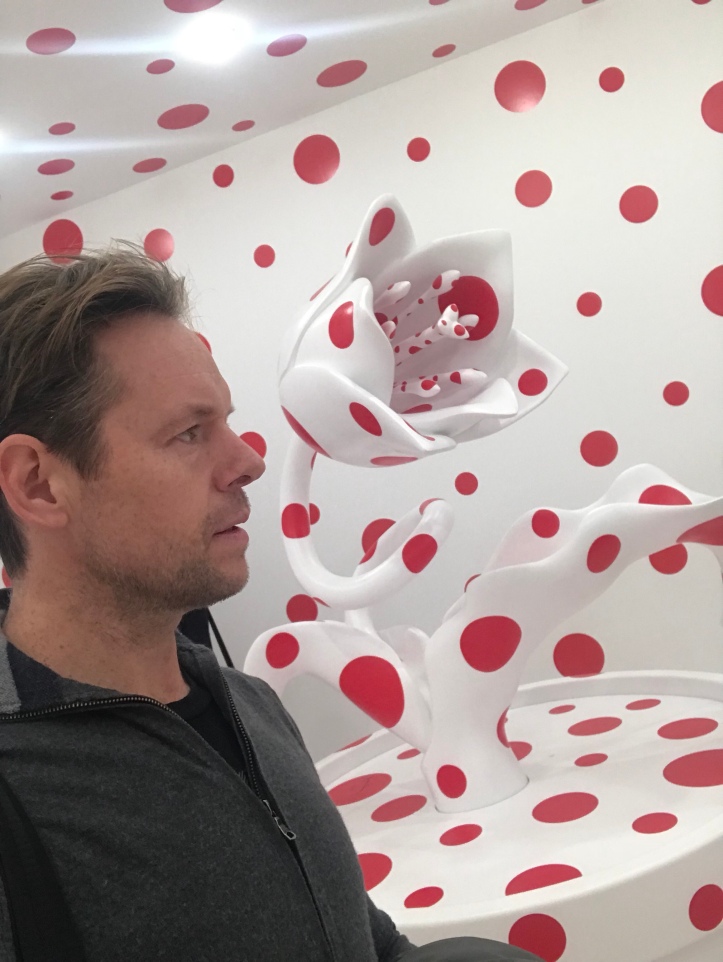 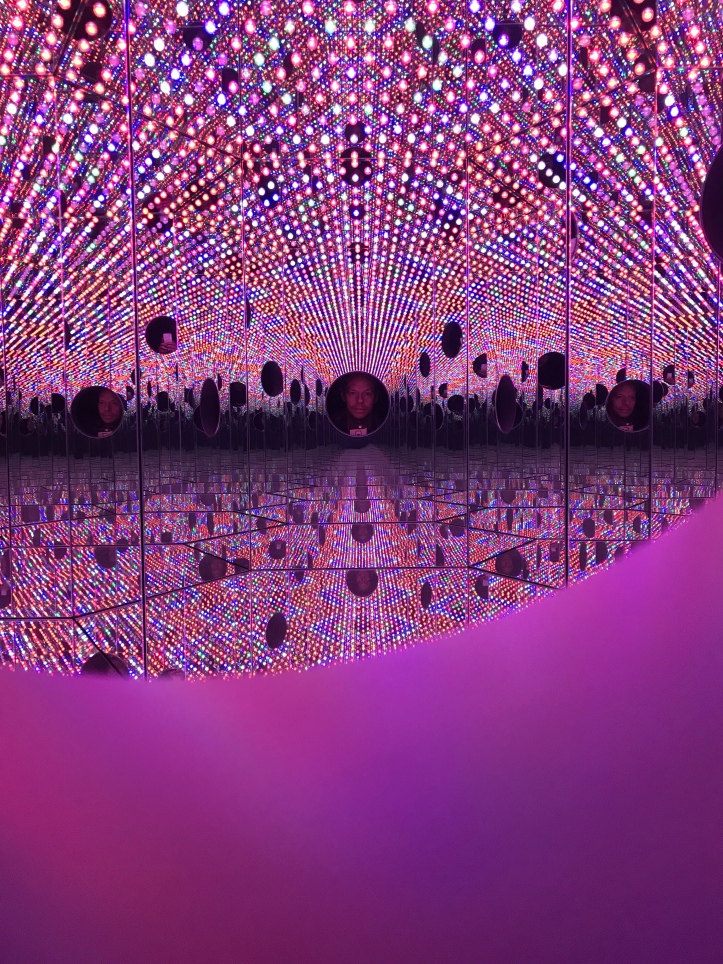 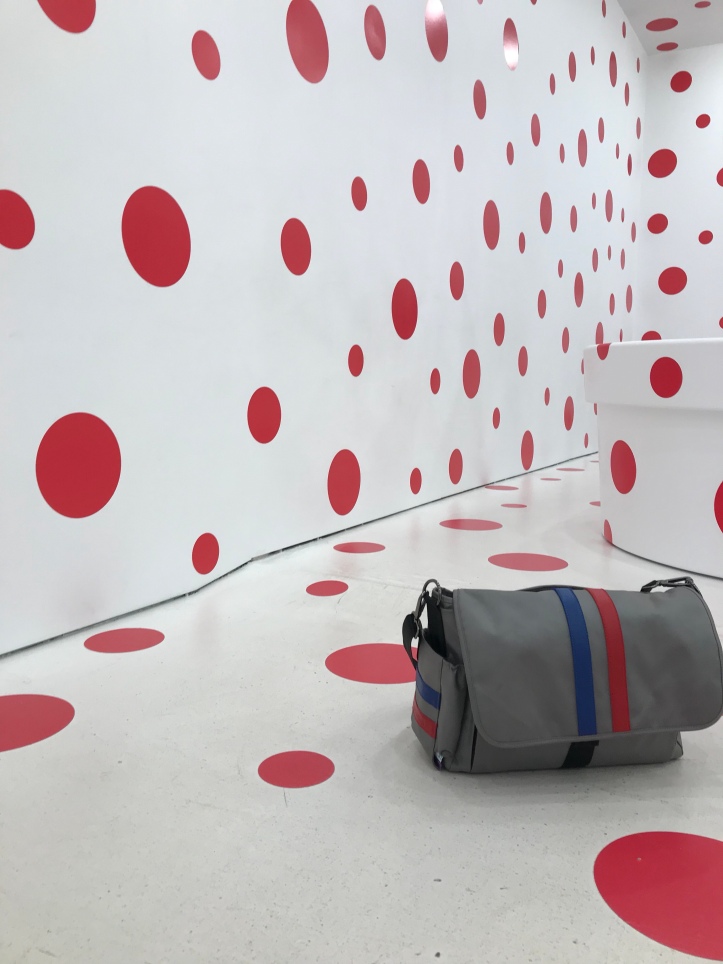