Adele, THAT Adele, was our Nurse

So a few nights ago, I found myself in a London emergency room.I know: whaaaaat?

My younger son had a collision at a playground and bit his tongue. There was a lot of blood, but it stopped quickly. He said he wanted to go home, but daddy was all, “Kid, we schlepped all the way to the Princess Diana/Peter Pan playground because the damn blogs said it’s a ‘must’. We ain’t leaving til you’ve found the Lost Boys and made someone walk the plank.”

I bought him ice cream.

The boys played for another hour.

Getting ready for bed, younger kiddo says, “My tongue is bleeding, again.”

“Come here, Buddy,” I beckoned, “and stick out your tongue.”

He did so. And I stared into a lingual abyss. Seriously – the Grand Canyon had etched itself into his little 3yo tongue.

I went white, took a video, sent it to some medical friends in the states and they said, “Yeah. You should have it checked out.”

So, for the second time in 6 months, I took my youngest kid to an emergency room in a European city. (I think I failed to write about being in a French E.R., last summer with the same accident-prone kiddo. I’ll get to that, eventually.)

We climbed into a cab, and we arrived at the hospital that Google said was closest.

I walked through the automatic doors and a man greeted me saying, “How can we help?”

“My son bit his tongue.”

Then we were ushered to the children’s waiting room.

I was disappointed to leave the main waiting room. It was the kind of crowd you’d expect for a Sunday night in the center of a massive city – mostly skinny crackheads and hooligans. They all had great accents, despite their ragged appearances. Like…the 35-yo rave-going meth addict with 4 teeth who loves soccer and drugs…and he’s cast in Pirates of the Caribbean Part 11 for his 4 jankety teeth and unhealthily skinny body.

Or the hot Black man who’s just come from “playin’ football wiff mah mates and I cracked my leg.” And he’s cast as the best friend in Love Actually.

Or the 28-yo who should have his shit together, but he’s a millennial who opted for a life of crime on the streets and petty drug-dealing and he’s the romantic lead in Trainspotting 2.

Misery in a London hospital on a Sunday night is so charming!

So many accents on this tiny island, and some people are incomprehensible to each other.

In the children’s waiting room, the parents were equally charming. I refrained from asking if they’d all been guest stars in various UK shows. I’m sure they think the same of us – hillbillies, NYC cops, everyone overweight. They probably think we’re all TV clichés, too.

After a mere fifteen minute wait, the nurse called our name.

I swear to you: it was Adele in a nurse’s costume. I kept thinking, “where’s the hidden camera? PLEASE tell me she’s going to bust out in ‘Chasing Pavements’ while examining my kid, to whom she keeps saying, ‘Oh, darlin’, yo’ jus’ so luuuhv-lay.’”

She said “lovely” 17 times in five minutes. It was pronounced, “luuuuhv-lay”.

She looked at my kid’s tongue and said, “Ohhhhh, yoo’r a cheeky mohnkey, ahn’t you?”

She continued – “Usually we don’t do stitches, but if they prove necessary, we’ll send you next door to the main clinic. Now, the emergency room is free of course…”

“…but if we send you for sutures, there’ll be a charge. I assume you have travelers insurance?”

I confessed “Who, me? Come to London for two weeks with two children under five, during which time we just go from playground to playground? Why would I need traveler’s insurance?”

She smiled graciously…as one does in England. “Well, there’ll be a charge.”

I laughed. (Those people arguing against universal health care saying “Europe is a mess!” need to bite their own tongues and come sit in a European emergency room, themselves. With all the professional background workers as entertainment.)

Finally, the doctor came in. He was South Asian (Pakistani? Indian?)…with a Hugh Grant accent, piercing green eyes, and oozing charm. Perfect for the next romantic lead of the next Love Actually spin-off.)

And that was it. We bid goodbye to our new friends in the waiting room – the woman with her feverish son who sounded like a “Wildling”, the dad who was clearly “Targeryen” and the twins who were both clearly Lannisters. Yep – all the major tribes of Game of Thrones, all in my emergency room.

Seriously: the entire country must do background work.

I never did find the hidden camera. 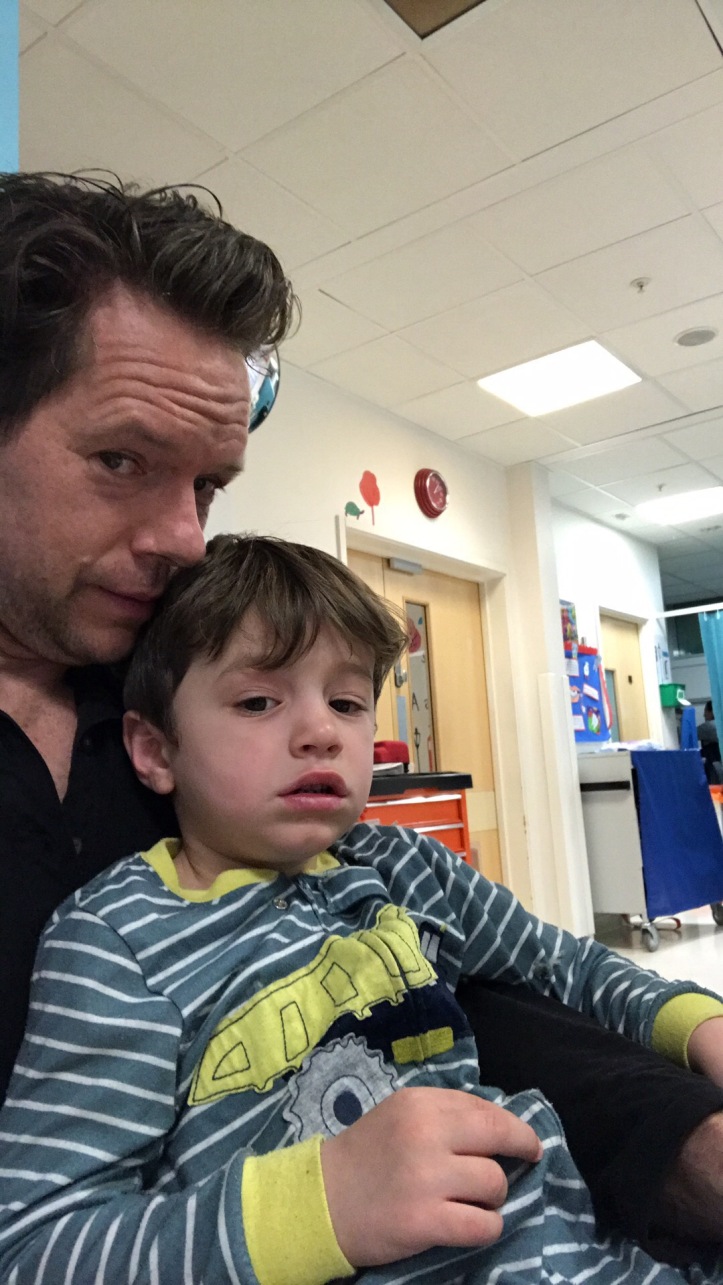 Join 2,742 other subscribers
Follow Daddy Coping in Style on WordPress.com